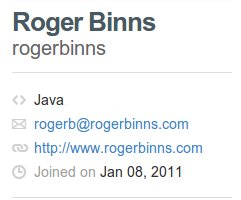 That is what Github tells the world about me. It isn't true and they won't let me change it. The problem area I am referring to is Java. The implication is that I have only one language talent, and implicitly that I endorse Java. While Java was a good solution in its first half-decade of life, it has been an increasingly poor solution since then, in my opinion. I did ask Github support to remove that, and they refused.

Github refuse to consider putting your private activity into that calculation. We'd have no problem with that at all. Heck we are hiring and would want people to see that Python is something we do a lot of, as well as Javascript, CSS, HTML, Objective-C, C and even on occasion Java when doing Android work. The Github profile should help viewers get a better understanding of the person, not malign them.

What I really do with Github

What they tell the world