When people find out that you pay for incoming cell phone calls in the US, it seems illogical and likely part of the various issues where the country is dysfunctional (eg politics, health care, rampant hypocrisy). However there are good reasons for this system and issues in your own country you may not be aware of.

This means that when a call goes to a cell phone, it costs more than going to a landline. Somebody ends up paying that difference. 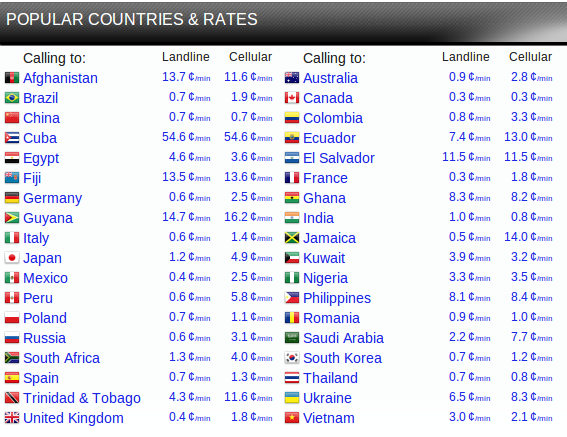 Screenshot from a random calling card site. Note that these costs include the costs to route the call to the country, in addition to the landline or cellular termination. ie the termination fees have an even larger disparity than shown here.

Look at the United Kingdom or France where the cellular rates are considerably higher than landline rates [2]. Most countries decided make the caller pay for these higher rates, but the caller had to know they were doing that. Consequently they had to allocate new area codes for cellular (these are the UK ones). Every person making a call has to know which codes are which, and some knowledge of the different rates [3]. Receiving parties can't port non-cellular numbers. Cellular carriers have no incentive to reduce their rates.

In the US the difference between landline and cellular is paid by the receiving party. The North American Numbering Plan means area codes can't change from 3 digits without massive disruption, and that there aren't enough spare area codes even if they wanted to assign them to cellular (eg 36 area codes would be needed to get one number for every American and Canadian, and have some pattern to recognise the codes).

So is the US system better? It has a number of advantages:

The US system does make sense, and does have a number of advantages. Someone is always paying for the difference between landline and cellular virtually everywhere.

The US carriers also charge for incoming SMS. This is more a case of being able to get away with it, mixed with some of the reasons above. However most plans these days are for unlimited voice and SMS, with the big charges for data consumption.