TLDR: Panasonic use an outsourced company for support that is beyond comical. This includes only being able to provide answers they already have, surveys that can't be completed, and general behaviour indistinguishable from gross indifference.

If find it fascinating what companies do these days. They hate their users so much that third parties [1] are hired to deal with them. And you can bet those third parties are used because they are cheap.

Most of them seem to operate by having 10 or so common answers, and pattern match your question to the closest answer, hoping to close the incident as quickly as possible.

Many software companies still think that it’s “economical” to run tech support in Bangalore or the Philippines, or to outsource it to another company altogether. Yes, the cost of a single incident might be $10 instead of $50, but you’re going to have to pay $10 again and again.

This is extremely short term thinking. The best customer service is one you don't have to contact because things just work. And when there are calls, actually address the issue so that more calls do not come in. And use this to make your future products better. Better products result in better sales in a good feedback loop. Worse products and blowing your customer interactions is a way to bleed away customer loyalty and future product purchases. Often that forces competing on price due to the lack of other virtues, and isn't particularly profitable or good for the long term.

Panasonic makes many consumer goods, amongst them cameras. I bought a DMC-ZS40 which includes [2] wifi functionality. When connecting to a wifi access point it won't let you enter a space in the password. 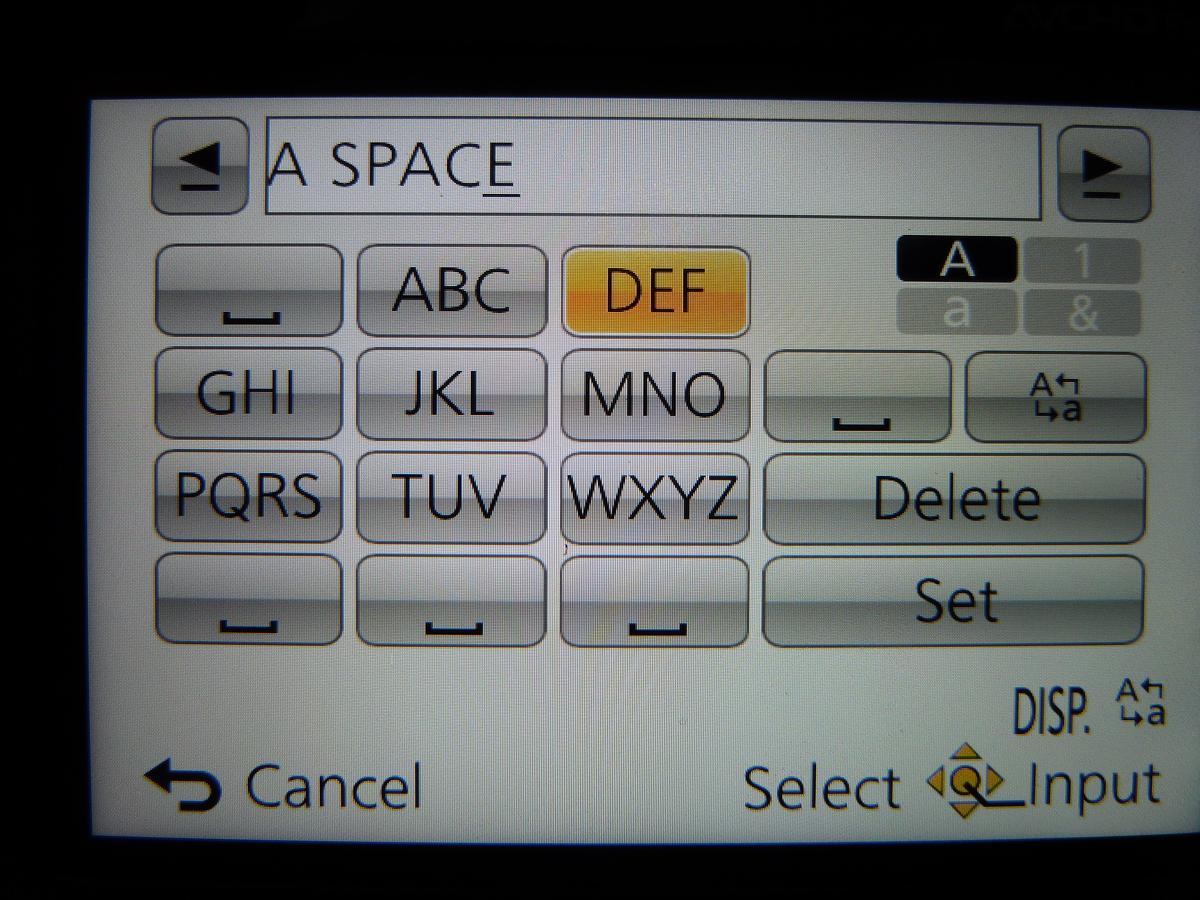 Normal text entry screen showing that a space is entered. There are 5 buttons letting you enter a space. 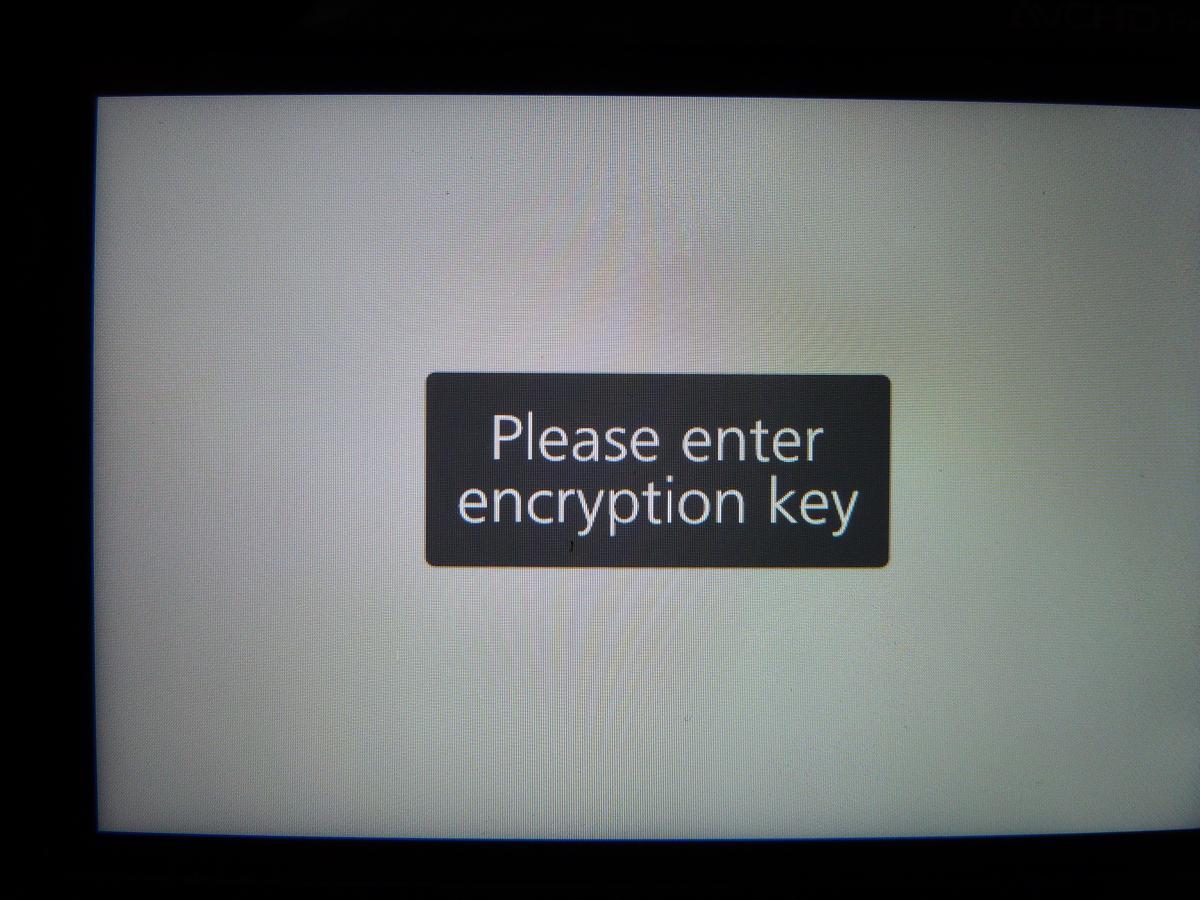 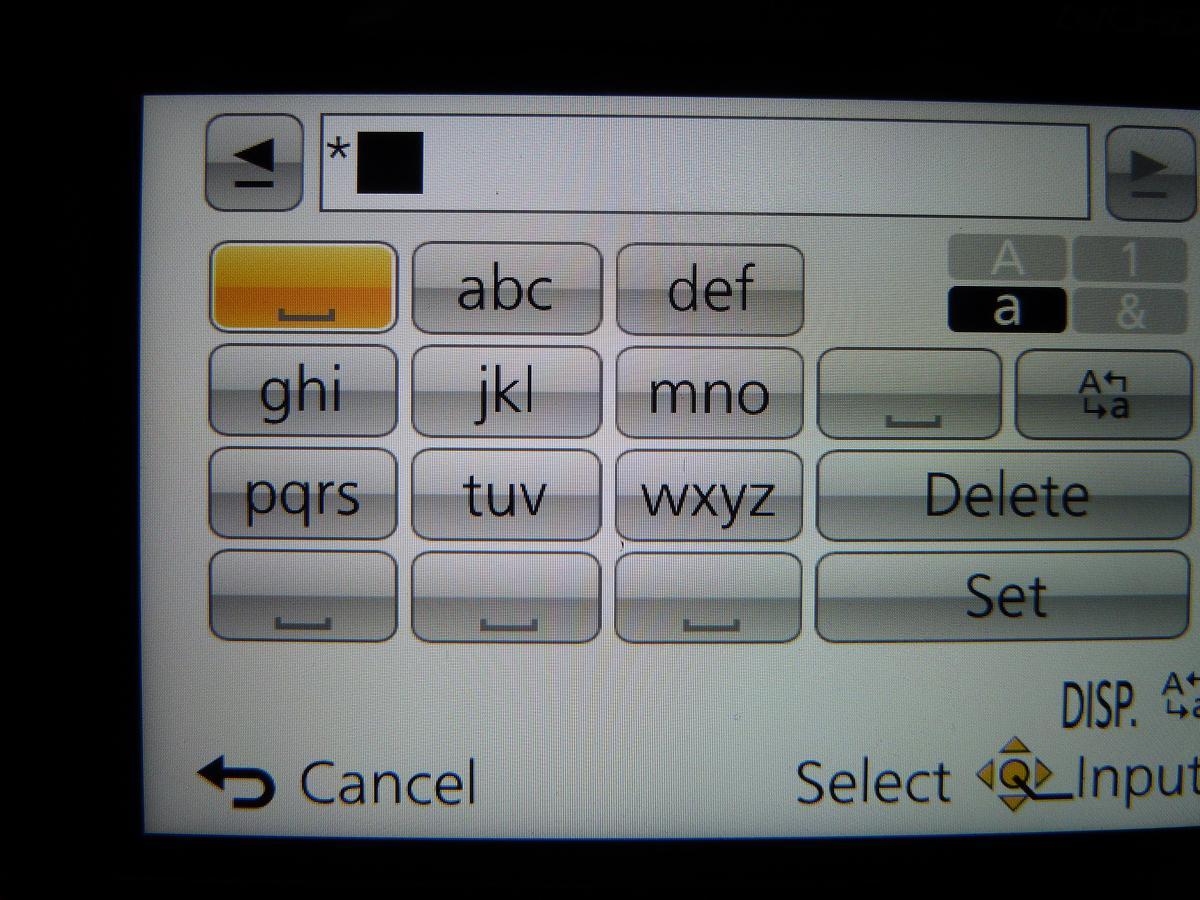 All space buttons are disabled and clicking on them has no effect. You may need to click on the image (full size) to see the lighter gray disabled look for the space buttons.

Spaces are perfectly acceptable in wifi passwords. Heck all the domestic access points I have access to use them! Now you know and I know that this is a bug [3]. But rather than being presumptuous I contacted Panasonic support to ask how I enter a space in wifi passwords. Maybe there is some other way in just this case?

I started with online chat. It quickly became clear that the customer service staff do not have access to the cameras, nor had they ever used that model or its similar predecessor. I pointed to the screen shot on page 75 of the manual (warning: PDF) and explained that the spaces worked elsewhere, just not for wifi passwords. I had to repeat this over and over again - I can enter spaces, just not for wifi passwords.

The rep tried everything but didn't really grasp what was going on. And short of some secret setting there is nothing they could do, other than take a lot of time to not address the issue. Eventually they told me to call phone support.

It took 5 phone calls. The calls are answered by an IVR (voice) system that asks which product, then if they recognise right what you want (eg support, buy accessories) and then in support if you want to hear common tips before finally connecting you to a person. Actually just before the human connection they ask if they can call you back for a survey [4]. At no point can you press buttons - you can only proceed by speaking. (You also can't go back.)

#1 I describe the issue to a person who immediately hangs up. My guess is wifi related issues are longer calls and make their stats look worse.

#2 It decided that I was talking about a TV, and then connected me to a number saying it was out of service permanently.

#3 The rep never spoke and I could hear some background talking for about 10 seconds before it got quiet. After trying various things to get attention I hung up.

#4 It decided I wanted to buy parts and insisted on taking me down that road. Yes I did end up swearing at the idiocy.

#5 I got through to a person and did pretty much the same as with the chat person. (Yes they too had no experience/access to the camera or seen its keyboard.) We did the page 75 of the manual thing plus fruitless attempts to enter the space. After 28 minutes they decided that a higher level support person needs to get back to me. I'm not sure if it ever sunk in that I was perfectly able to enter spaces -- just not for wifi passwords. 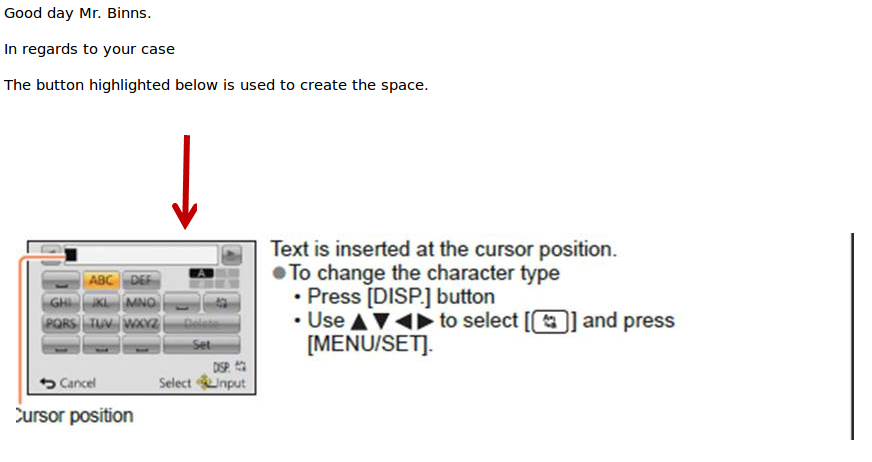 The next day this arrived

That is cut straight from page 75 of the manual - the same one I kept pointing them to. I am completely mystified as to what the red arrow is pointing to.

Needless to say this has cost Panasonic money and is going to cost them even more as I persevere to get the issue addressed. It didn't have to be this way.

Update: I then tried to use the "email" option where you enter details in a web form and will get a response within two business days. This was so I could link to screenshots to show the problem. I still hadn't got a response 10 days later.

I did another chat where they acknowledged the issue but said there was absolutely nothing that could be done. They refused to actually tell Panasonic about the issue. Insisted I call because they can't take personal information in chats. I pointed out I didn't need to be contacted, they already took my information to initiate the chat, and it is Panasonic who need to be contacted on the issue. The chat transcript they emailed also included a survey link. Clicking the link just resulted in a redirect to the Panasonic US home page.

Figuring that nothing would happen, I did phone call too. After some back and forth, including giving an imgur url verbally they finally came back and told me you can't enter spaces in a wifi password. I had to remind them that was exactly what I had told them. Then I was told the camera was set in stone and could not possibly be changed. I pointed out the firmware version was 1.0 and my previous model had firmware updates, so it was perfectly possible. Eventually the rep said the information would be passed on to Panasonic (yeah right). I got the usual phone call survey afterwards where a few questions in it wouldn't recognise answers.

I am befuddled as to why Accent/Panasonic aren't noticing a lack of survey responses. It is in Accent's interest that negative ones don't get through.