This release of APSW (my Python wrapper for SQLite's C interface) is the last that will support Python 2, and earlier versions of Python 3 (before 3.7).

If you currently use APSW with Python 2/early Python 3, then you will want to pin the APSW version to 3.37. You will still be able to use this version of APSW with future versions of SQLite (supported till 2050). But new C level APIs won't be covered. The last C level API additions were 3.36 in June 2021 adding serialization and 3.37 in December 2021 adding autovacuum control

What does APSW support now ...

APSW supports every Python version 2.3 onwards (released 2003). It doesn't support earlier versions as there was no GIL API (needed for multi-threading support).

The downloads for the prebuilt Windows binary gives an idea of just how many Python versions that is (15). (Python 3.0 does actually work, but is missing a module used by the test suite.) 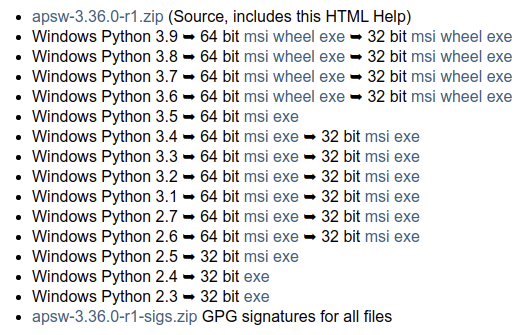 Each release does involve building and testing all the combinations of 15 Python versions, 32 and 64 bit environment, and both UCS2 and UCS4 Unicode size for Python < 3.3, on multiple operating systems.

I wanted to make sure that APSW is the kind of module I would want to use. The most frustrating thing as a developer is that you want to change one thing (eg one library) and then find that forces you to change the versions of other components, or worse the runtime and dev tools (eg compiler).

I never made the guarantee, but it turned out to be:

You can change the APSW (and SQLite) versions, and nothing else. No other changes will be required and everything will continue to work, probably better.

This would apply to any project otherwise untouched since 2004!

There are two simple reasons:

I am going to delete code that works, but it is mainly in blocks saying doing one thing for Python 2, another for early Python 3, and another for current Python 3.

My plan is to incrementally remove Python 2/early 3 code from the Python test suite and the C code base together, while updating documentation (only Python 3 types need to be mentioned). The test suite and coverage testing will hopefully catch any problems early.

I will be happy that the code base, testing, documentation, and tooling will all become smaller. That makes things less complex.

The hardest part of porting APSW from Python 2 to 3 was the test suite which had to remain valid to both environments. For example it is easy to create invalid Unicode strings in Python 2 which I had to make sure the test suite checked.

It was about 10 times the amount of work making the Python test suite code changes, vs the C level API work. Python 3 wasn't that much different in terms of the C API (just some renaming and unification of int and long etc).