I've always been curious why there are so many +Android backup applications. Technically the backups are trivial - apks are at a known place and each app's data is at a known place, so just grab that stuff for backups and put back for restores. Android 4 has adb backup/restore commands which do pretty much that. Simple, effective, what could go wrong? Short answer: it is quicker to just delete your data. Those backup apps exist for a reason.

Yesterday I decided to wipe my phone and tablet back to factory images. In particular I wanted to encrypt them, and I did want root, but didn't need +ClockworkMod recoveries which rooting usually require you install first. +Chainfire has a CF-AutoRoot that does that for you.

Backing up the phone gave me a ~400MB archive (I didn't include apks since they can be easily redownloaded). I did the wipe/factory/root/encrypt dance and then did my restore. It had no effect as far as I can tell. And I had to manually select every app I wanted again in the Play Store. Doing another restore after that still had no effect.

Having learned my lesson, I did a backup of the tablet including all apks. It was ~12GB. Did the wipe/factory/root/encrypt dance and then did the restore. It restores one apk and then the Android gui crashes, restarting itself a few seconds later. This is completely repeatable. Gui crashes don't have a crash reporter so Google won't even know this happening. And I'd love to hear the explanation as to why a restore would crash the whole gui environment.

I could of course manually dig things out of the backups, but that would be far too time consuming. There is no unique data on the devices so I didn't actually lose anything. But the reinstall of every app, having to supply usernames and passwords to so many of them, changing settings, and placing them in the right places in the launcher is really tedious.

Dreamliner woes: Are sweaty passengers to blame? – Is it possible that one of the key benefits of the Boeing 787 Dreamliner, which is denser and more humid ... (more)

Interesting speculation about a potential cause/correlator with the 787 battery issues - hundreds of breathing perspiring passengers create very different environmental conditions, and especially different than during certification.

Nicotine would get everywhere and had the advantage of being visible back in the days when smoking was allowed. (See also China Airlines flight 611.)

How blind users use screen readers

I highly recommend this video showing how blind users use screen readers. You'll be surprised at just how fast they run, as well as ways they distinguish case.

Fun things to do to the human brain

Fun things to do to the human brain. His "ad" for a cruise ship is also excellent (NSFW) F***IN' CRUISE SHIP!

+Andy Glew speculates about Google news favouring stories about driverless cars. All it takes is watching one of the car crash compilations on youtube to make you wonder why we even let people drive cars.

One interesting aspect to me is that there are situations where the laws of physics mean an accident is definitely going to happen - the kinetic energy has to go somewhere when you are less than the stopping distance away from other vehicles. What should the driverless cars do in that situation? For example it could try to keep the minimum number of vehicles involved, or the minimum number of people. Is it better to have fewer people hurt worse than more people hurt lighter? Full width of the vehicle collisions are better than partial width because there is more in the way to absorb the energy. Given the choice between hitting two vehicles should the one with better safety features/rating be the target?

Will cars start having something like TCAS as they do in aviation? When multiple cars have to move out the way to prevent an accident it provides a negotiation model. Will cars with drivers also have it?

It will become in everyone's interest to have cameras as black boxes (pretty much standard in Russia due to insurance fraud which is why so many videos come from there). In any crash where a driverless car is involved that car will need them to prove it wasn't at fault. And of course the 90% of drivers who think they are above average will want them to prove the driverless cars or other drivers were at fault.

I've used the Google Chrome To Phone extension for two years now. In theory it is very simple - while on a page (or selected text) in desktop Chrome, press the button and the page/text show up instantly on your Android device. Behind the scenes it is using c2dm gcm and serves as a useful demo including source code.

In practise it isn't as good. The "instant" is sometimes instant, and sometimes never, and sometimes a random time period inbetween. Rebooting a device can result in over a month's worth of content all showing up at once. I also have more than one Android device (perils of being a developer) and in theory the url should be sent to all of them. Again it is very unreliable.

Today I finally got rid of the extension from Chrome and the app from my devices, switching to Pocket based on the recommendation of +Stephane Verdy . Looking good so far ...

The items in your pitch

The Presentation Mistake You Don't Know You're Making When salespeople, marketers, and job interviewers add on extras, they undercut their pitch. (more)

An excellent article on something many of us probably don't realise. When you present a list of items (eg good things about your company or products) you believe the audience adds them up to get a final tally. In reality they average them. Keep those lists short and sweet.

My opinion matters (not)

A month ago Nielsen sent me a card explaining how they would call me on my landline in order to talk about TV ratings. Since I don't have any phone plugged in, I thought that would be the last I'd hear from them.

Much to my surprise a thick envelope came in the mail today. The next surprise was seeing 5 one dollar bills inside. Since mass marketers pull stunts with fake cheques all the time I expected them to be fake too, but they are real.

There is a diary they expect me to fill out for one week. It soon becomes clear that it isn't aimed at anyone who cut the cord and watches TV on DVD and the Internet. And really drilling down it finally dawned on me that they don't actually care what TV shows you watch - they are really trying to find out which TV adverts you watch. The answer to that is none, but there is no way to communicate that to them. At least I get 5 bucks. And sadly I won't be spending that week watching Firefly and Futurama. 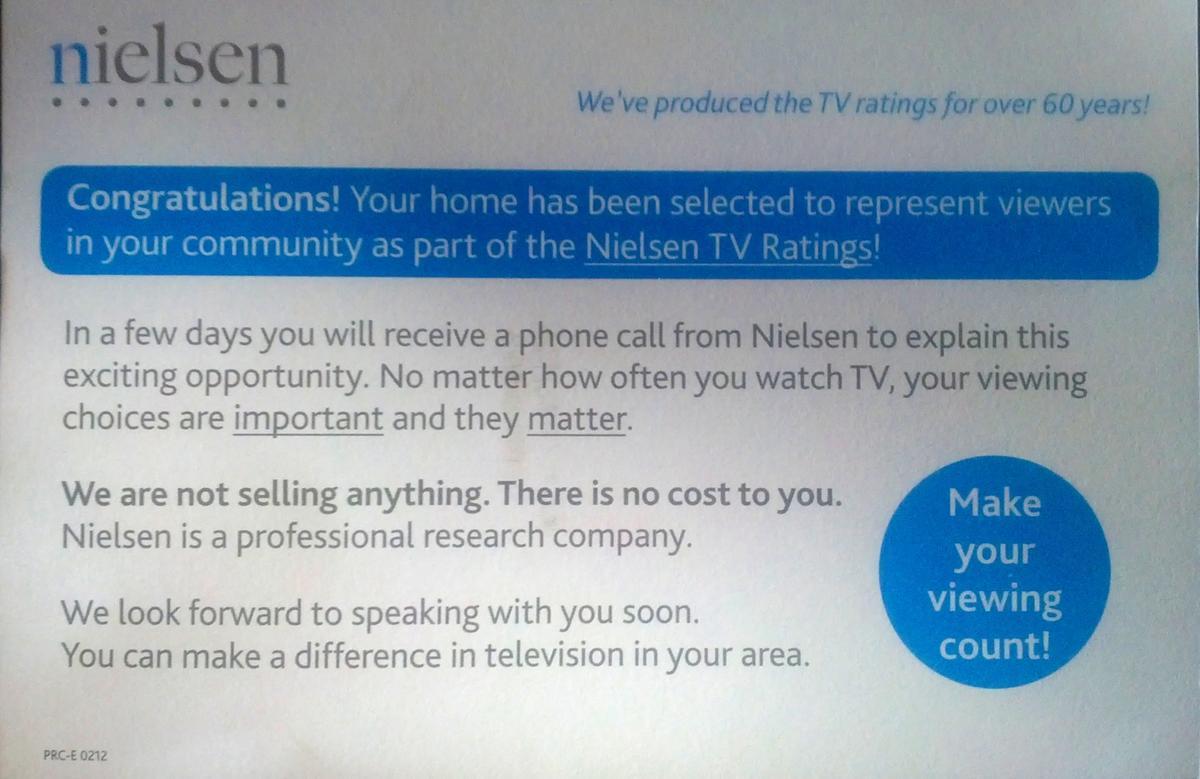 This arrived in the mail the other day. Finally they are going to include someone like me in extrapolating what people really watch. For a change Firefly and Futurama and did I mention Firefly will matter. The joke is on them as my "community" is far more Reddit and Hacker News than the people geographically around me.

But of course the joke is really on me and viewers of stuff I like. There is no phone on the line they will call. And I don't even have TV service, instead relying on DVDs I bought, Netflix sometimes, Hulu sometimes, links to Daily Show clips and anything I may accidentally see (on planes, hotel rooms, Youtube etc). Of course Nielsen don't measure anything remotely like this.

(It is a separate rant about how in this land of "free" competition I am forced to pay for a phone line I don't even use.)

A wonderful take on a music video

A wonderful take on a music video. You get the singing combined with foley effects based on the scene but not the backing music. (Source: reddit)